There is no place for pro/anti vaccine divides, when it comes to allegations of corporate fraud.

Yet all across the media, the focus of the discussion about the Merck lawsuit is not to really discuss the issue, but to slap the "vaccine foes". The first example came out loud and clear in Forbes magazine. You don't have to read further than the title, to know where Gergana Koleva is heading.  She is hoping Krahling and Wolchowski lawsuit is all lies, and so she plants a decoy story.   Her article title was  “Merck Whistleblower suit a boon to vaccine foes even as it stresses the importance of vaccines.” The URL, reads, "Merck whistleblower suit a boon to anti vaccination advocates though it stresses importance of vaccines."

Nothing like hanging out provaccine bias for all to see.  But the problem is, Gergana seems to be blind to her own message, insisting that those who are calling out her bias, are guilty of "baseless criticisms".  Medical history from 1998, stated that there was something badly amiss with the Merck Mumps vaccine. These two 2007 medical articles Brunell and Peltola are compulsory reading.

When journalists like Gergana, who claim to specialise on corporate fraud, bioethics and health, publish an article, readers would expect to enjoy a competent fleshing out of facts; a time line; the medical literature; the legal process; the facts about the Department of Justice; the history of the company including history of previous corporate frauds, and how corporate fraud affects us all in day to day life.  Yet what they got from Forbes, was primarily a fingering of the "vaccine foe", which is particularly noticeable if you analyse the adjectives she used when describing the two "sides"; dripping doubt about the case, and dripping sarcasm, aimed at the "vaccine foes"....

After glossing over the case as fast as possible with minimal analysis, Gergana launched into her main mission, incorrectly stating that the "Department of Justice refused to rule on the case.”  This was done in my opinion, to link her incorrect comment about the Department of Justice, to Merck's statement that the case is "without merit". A perception is thereby created in the reader's mind, that if the DOJ's investigation has found the case to be true, they would have joined with the whistleblowers.  The slant of the article infers that because the Department of Justice did not join the case, and Merck said that the case is "without merit", ....there must be nothing to the case.

But is that what the Department of Justice said, and did?  No.

In case anyone is wondering, this document sets out the procedures which the DOJ should take:

"At the conclusion of the investigation, or earlier if so directed by the Court, the Department of Justice must choose one of three options named in the False Claims Act:

1) intervene in one or more counts of the pending qui tam action. This intervention expresses the Government’s intention to participate as a plaintiff in prosecuting that count of the complaint. Fewer than 25% of filed qui tam actions result in an intervention on any count by the Department of Justice.

3) move to dismiss the relator’s complaint, either because there is no case, or the case conflicts with significant statutory or policy interests of the United States."

Another quote (emphasis and underlining mine):

Upon intervention approval, the Department of Justice files

1) a notice of intervention, setting forth the specific claims as to which the United States is intervening;

2) a motion to unseal the qui tam complaint filed by the relator and the notice of intervention. All other documents filed by the Department of Justice up to that point remain under seal.

Who does the unsealing?  The Department of Justice.  The investigation by the Department of Justice, took two years to not only complete, but would also have collectively considered the IMPLICATIONS of all the evidence they gathered.  They would have looked at who was involved; any FDA involvement; any CDC collusion... and then they would have made a decision based on the likely ripples and fall-outs of what they found.

The DOJ has not stated anywhere, that they found the allegations false, or that they REFUSED to join the case.

If the DOJ had actually found the case “was entirely without merit, and had absolutely no basis in fact”, they would not have wasted two years.  Wouldn't they have taken up option 3 above, and filed a motion to dismiss the case? Then there would have been none of the following actions from the second quote. Wouldn't the Department of Justice have then clearly stated to the media, that the case had no merit?

We'd have heard about it by now, if the case had no merit.

What did they do?  The Department of Justice reserved the right to join in the case at any time in the future, and then allowed the complaint to be unsealed so that it could then go to trial.

Which by the way, is where the LEGAL merits of the case will be decided.  We already know the medical merits of the Merck Mumps vaccine, because as I have detailed in another blog, the lack of efficacy of the mumps vaccine has been pointed at in the medical literature since 1998.

The beauty of the Department of Justice's decision, is that they can actually hunt with the hounds, while trying to protect the hares at the same time.  If, as the case develops it starts to look really bad for Merck, the Department of Justice can then jump in and join the case, which would create a public impression of "doing it's duty", while accumulating acclaim and "brownie points" along the way.

Which is the nature of medical politics.

There is no DOJ in the world which would reserve the right to JOIN any case in the future, which it knows is a bag of hogwash.

........The ONLY thing that lack of DOJ participation indicates but does not say...., is that the FDA is severely exposed on the issue.

If Gergana knew her history and had read the complaint properly, she would know that Krahling and Wlochowski were accusing Merck of systematically, and serially over a long period of time commiting both corporate fraud as well as defrauding the government and misinforming parents.  Gergana should also know that this isn't the first time Merck have done this, either with vaccines or drugs. (And it won't be the last either.)  There is a raft of proof in the USA Senate records themselves.  Here is just ONE example: 1972 senate hearing discussing 32 useless vaccines still on the market at that time which also discussed the "useless" flu vaccine.  Anyone who has read the Cochrane review discussion points or Simonsen's medical articles, will know the flu vaccine is still useless, but is so far, the best half-century fraudulent money-fountain a vaccine manufacturer could hope to sell.

Any journalists with a longer memory might also remember (or chose to forget) another senate hearing, devoted to the fact that the efficacy of the injectable SALK vaccine was also misrepresented.  How many journalists today, even wonder why it was that the Salk vaccine was replaced with the Sabin vaccine in the early 60's or question why those who had been injected with the old Salk vaccine were then told to go and have three doses of the Sabin vaccines?  Shouldn't that "known fact" raise questions as to the validity of the "myth" that the Salk vaccine vanquished polio from the USA?

The underlying focus of Gergana's story is to give Merck a glowingly provaccine free pass. Which is what all the provaccine media are doing right now.

Everyone is leaping to Merck's defence, yet when the CEO of Merck volunteered to lead Penn State's inquiry into the Sandusky allegations, media as well as ordinary people were unilateral in their condemnation that an ethically-challenged company like Merck would consider it appropriate that their CEO, could lead an investigation into somebody else's wrongdoing.

The irony is that if this corporate fraud case was about some other pharmaceutical product than a vaccine, ... like another "Vioxx", or any one of the other many other drugs that the FDA has to scratch over the years because of corporate fraud, the pro-vaccine tribe would be jumping all over Merck crying foul. (Particularly if one of their own had been maimed or killed as a result.)

The pro-vax argument at any fraud, should be outrage. If this case was just "alleged" fraud, none of the long string of medical articles questioning Merck's vaccine would exist.

The message to Merck should be that those who wish to vaccinate their children, deserve to be able to make an informed choice based on fact, not to be misled for decades, by fraud.

Mind you, the same argument can be applied to the flu vaccine.  Journalists world wide, ignore the fact that all vaccine manufacturers have consistently, since 1950, committed serial corporate fraud by alleging that the flu vaccine is wonderfully efficacious when it is not.  That too is not only clear in the medical literature, but expanded on, in various USA senate hearings. Why do journalists continually ignore the fact that the flu vaccine isn't what it's advertised to be?

Most publicly provaccine people have fallen into a similar trap.  The pro-vaccine people on facebook are defending the indefensible, and also using misleading arguments.

Here are two different examples of false arguments from Facebook.  This first example tries to defend the vaccine because Merck then found "efficacy" using the ELIZA test: 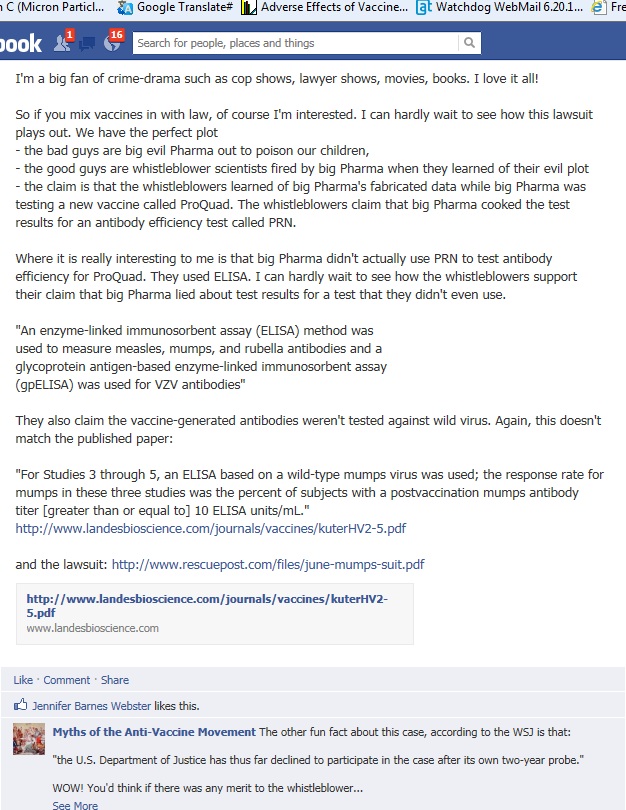 True, Merck used Elisa after Krahling and Wlochowski left, and do you know why?

Eliza inflates the efficacy as well, because it measure anything that attaches to a virus.  Whereas the FDA has been very specific in this medical article in stated that PRN is the gold standard, because it only measures the antibodies which KILL the specific virus.

Everyone with a brain knows that Eliza has serious limitations.  For instance, Eliza is the first test used to see if a person has HIV.  You'd be a fool to rely on that test though, because when a person is then properly tested for HIV, the majority of times, Eliza says you have HIV when you don't, because it's renowned for false positive tests.

And that's exactly why Merck used Eliza, because it casts such a wide net.


Again, let us not discuss the facts and their implications.  Here, the lie that the DOJ found the allegations factually false is used, when again... has the DOJ said that?  And if they believed it, would they reserve the right to join the case in the future?

Which is proof that lies whirl around the world twice, before anyone wakes up to the truth.  This is the main problem when a journalist's aim might be to be first out the blocks.  Speed is more important than thoughtful investigation.  And it's just about guaranteed that where speed is the criteria, then fact suffers in the outcome.

There should be no pro-vax/anti-vax divide on any form of systemic corporate fraud.

By making this a pro-vax/anti/vax divide, the provaccine are handing Merck a free pass.

But then, that’s exactly what Merck wants, isn’t it?