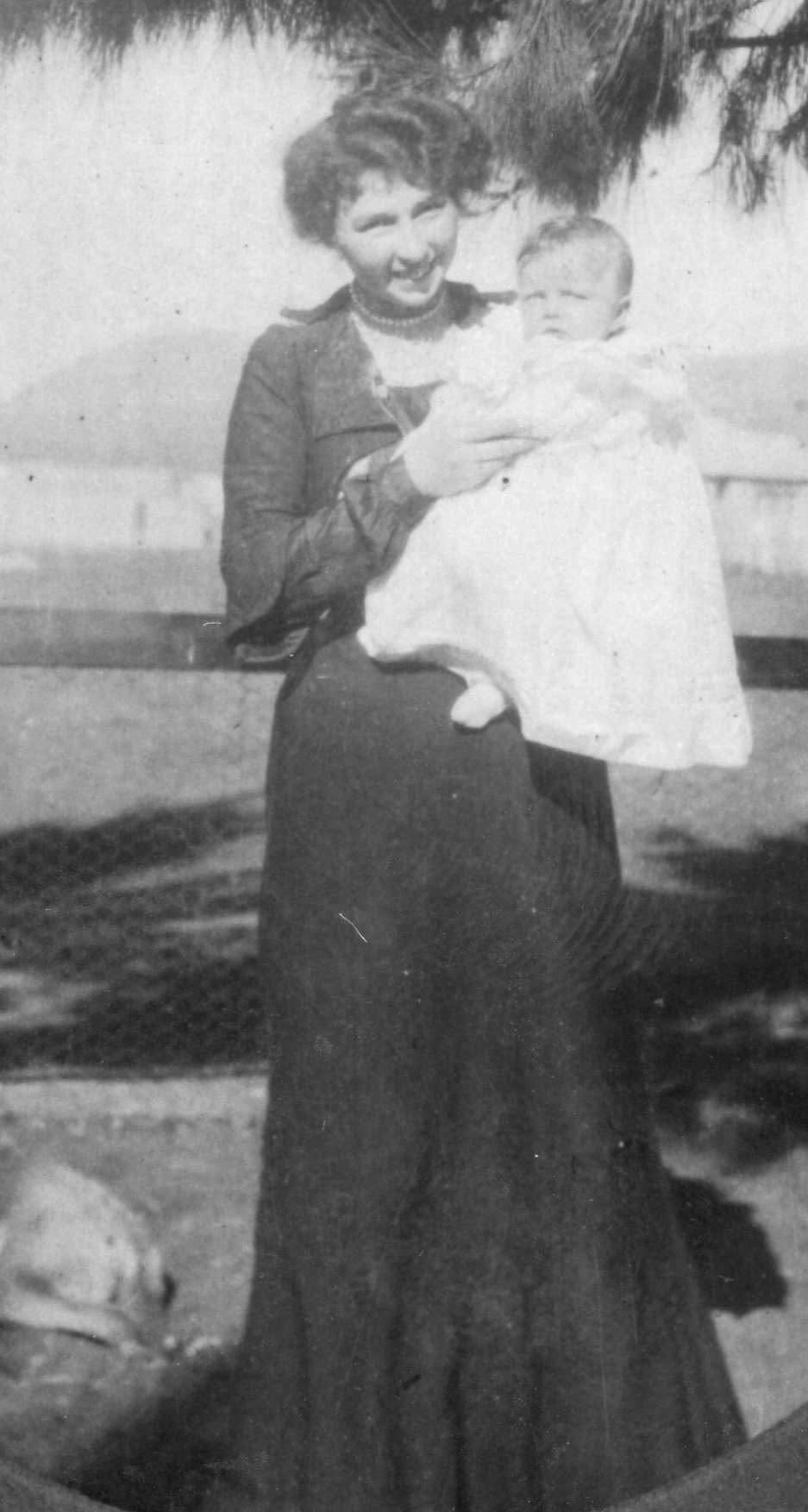 While watching the “pink” marches, my thoughts turned back to my grandmother. A real woman. Fiercely independent; well educated, who had the backbone and the guts to do the unthinkable. First she married my grandfather, but to get to him, traveled through Russia (trans-Siberian rail) on her own – something no “young lady” would do.

Sydney married Harold, whose work took him into many Asian countries where danger abounded. When they lived in India, a typhoid epidemic raged for seven years, and for the four years they lived there, Sydney nursed the sick locals, teaching them how to survive typhoid. Every country she lived in, she nursed the supposedly fatally-sick, and developed a reputation. No-one nursed by Sydney died. In their last year in India, Sydney got typhoid along with three children, and the locals abandoned her. She was too sick to nurse herself or her children properly.  She survived, though her hair changed colour, and two of the three sick children died.

In July 1911, six months pregnant with my father, Sydney took a passenger ship from Amoy in China to Kobe in Japan, sailing ahead of her husband and children, to prepare their home-to-be. Near Kobe, the ship was over-run by pirates. The pirates killed the men, and launched all the small boats without oars into the water with two women in each. One woman was shot dead in each boat, then the boats cut adrift.

Sydney survived along with a few of the other women. When her husband arrived, the law enforcement in Japan rolled their eyes and said, “Nothing doing”. China just laughed. Sydney and Harold tracked down the pirates, they were brought back to Japan, tried, and executed. I suppose the snowflakes would consider these photos to be cruel…. 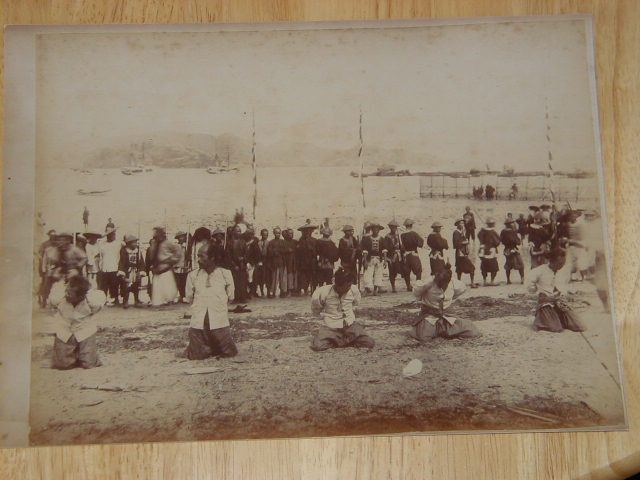 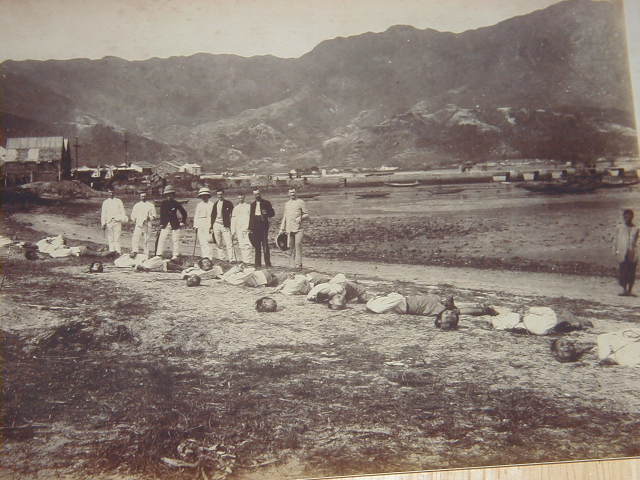 The First World War intervened, and the ship taking them home was diverted to New Zealand, 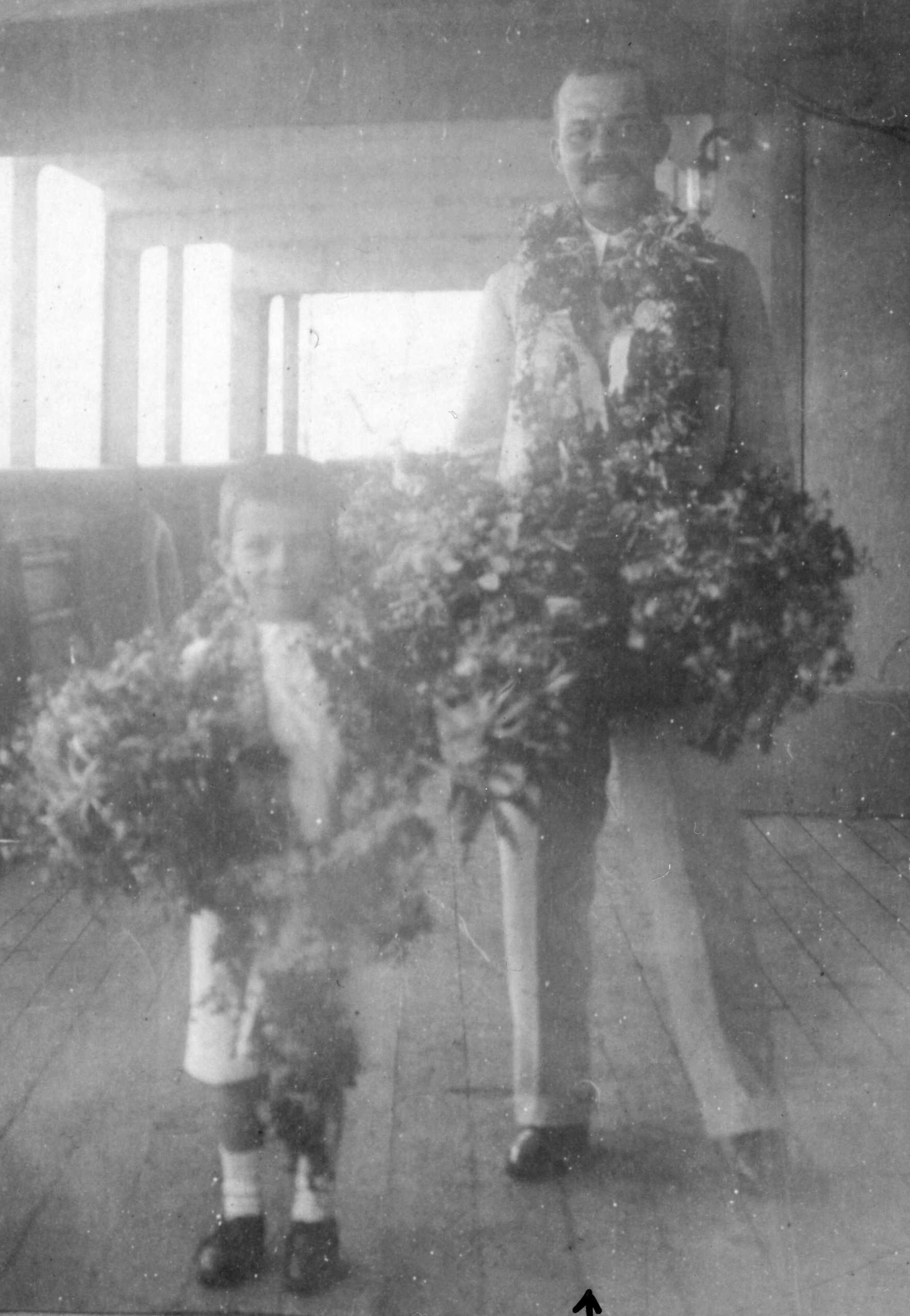 so they made the best of it, and decided to travel up to Northland via the coast. In doing so, they got caught in a storm, were pretty much shipwrecked, and landed up on Kawau Island, where they licked their wounds, just as the Spanish Flu arrived in force.

Sydney turned Governor Grey’s house into a hospital with the men upstairs and the women downstairs.

This was the woman who brought up my father. No surprises, but I learned two things at home. There are two words that don’t apply. “Can’t” and “Never”.

Strong women grow strong children. Strong women know who they are, what they are here for, and they make the very best of every opportunity handed to them. Strong women are not doormats. Strong women keep men accountable. Strong women make their own choices, they speak, and are heard. They work, and they control their own lives; defend themselves when they need to, and nothing stops them doing what needs to be done. They teach "pussy grabbers" manners, and put them in their place, without drama. Unless of course, they perpetuate it because they want it and seek it out… THEN they are part of the problem.

Ironically, coming to New Zealand in 1961, turned out to be a huge challenge for me, but the bullying and viciousness of my peers, had the same effect on me as the hardships of Asia had on Sydney.

It gave me a backbone built on discernment, control, knowledge, learning wisdom, resoluteness, and never backing down in the face of injustice.

I’ve spent the last 35+ years, helping others to do the same thing, in diverse situations. Real women change the world. They stand strong in who they are, become knowledgeable and astute, and see the female flake a mile off.

As I watched the marches yesterday, three things came through loud and clear…. First, they don't know how lucky they are, second, they have no idea what oppression really is and third, away from their handlers and emboldened by the mob mania, most of these people haven’t a clue what really matters.  If they did, they would have focused on protesting about real issues for women in the world ..., instead of sounding like ignorant asses. What they said shows their ignorance, 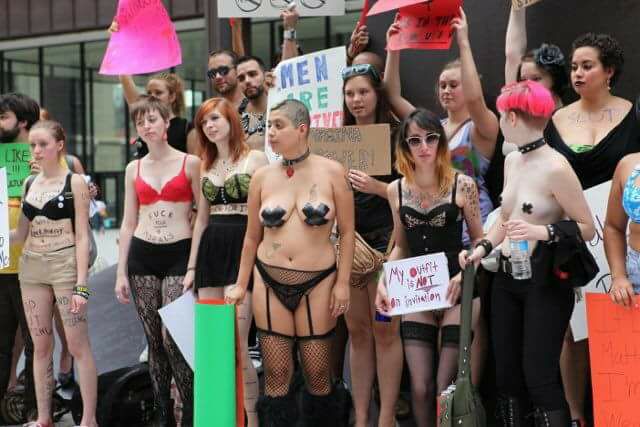 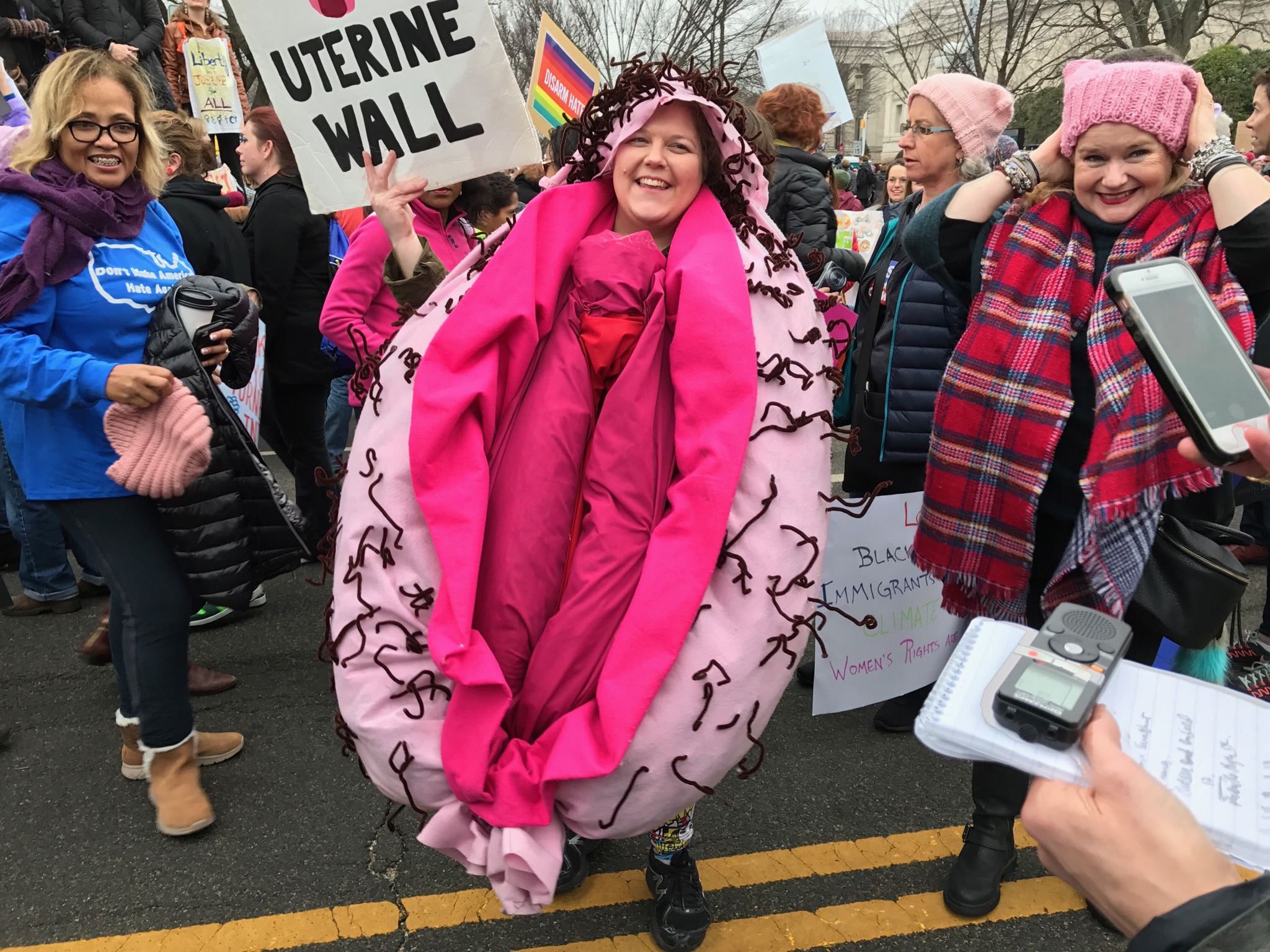 and what they left behind proves that they don’t care,

Real women, make a real difference, because they walk the talk.   Continue Reading

The Seduction of Satire. 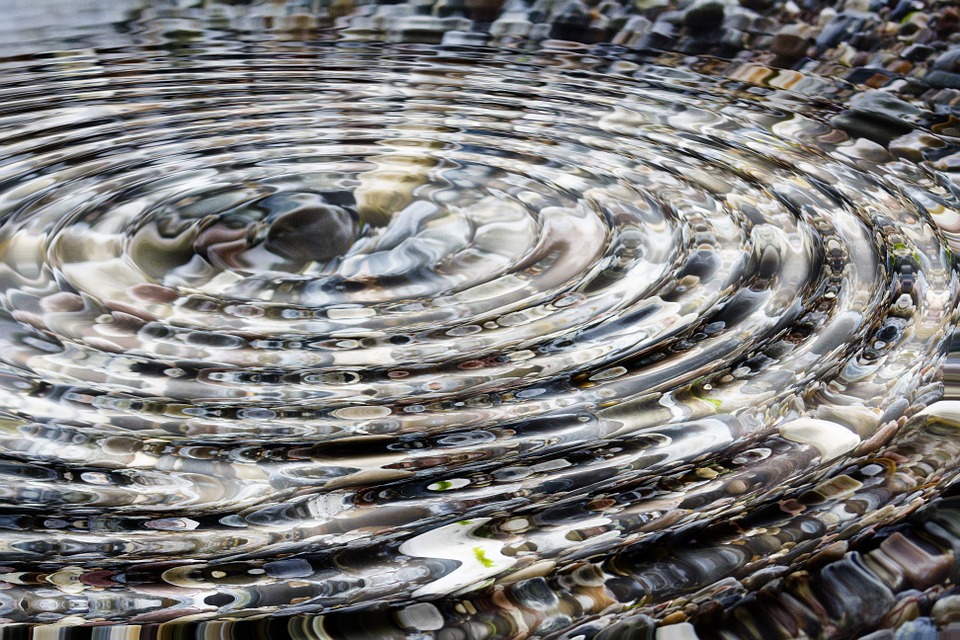 The Onion, which calls itself “America’s finest news source”, filled space with another vitriol variant on Mike Pence today. “What Hilary? You don’t like satire? It’s just words Hilary. Humour makes the world go around didn’t you know?”

What I know is that death and life are in the power of words, and those who love words, will eat the fruit of them,  and by their fruits you will know them.

Satire isn’t humour. Satire is writing lying words as if they are coming from another person’s mouth. Satire is written from a veneer of hatred, and its purpose is to shame and humiliate. It’s also a subtle variant of public fear mongering. Hidden beneath the cloak of people’s laughter, satire is designed to plant into people’s minds perceptions about people which are a stereotype, assumed, or even fabricated.

Oh, we’ve all heard those words, “Sticks and stones can break your bones, but words can never hurt you.” Never was a bigger lie written than that one. Words are seeds, which are planted and grow.

Words have started wars which have killed millions of innocent front-line soldiers on both sides, because someone took offense to words. Historians who know the effects of words, will know which words were spoken, that so riled Hitler, that he decided to take matters into his own hands, giving us the holocaust and World War II.

But did the people who spoke those words which resulted in shame and humiliation for a country after World War I, ever dream that those words would become the fuel which would set fire to Europe as the Second World War, and also result in ethnic cleansing?

But back to Trump.

Is satire funny to those who are at the butt end of it? Those who are crying in their beards about Donald Trump being president should perhaps consider the impact that satire can have, particularly when it’s done publicly, deliberately, and cynically.

America is now eating the FRUIT of the words spoken by President Obama who chose to use satire to relentlessly humiliate and shame Donald Trump in front of the nation.

America can also thank the previous and ONGOING serial lying out of the mouths of the main stream media, for the election of Trump, by people who saw the previous satire and the lies for what they were.

Listening must be followed by analysis, then a choice.  Believe it, or not. Then comes the action.

I see the outcome of voices, choices and consequences whenever parents come to me with a vaccine-damaged child. The story is always the same, every time.  Parents listened to lies, believed the lies, and never bothered to read the vaccine data sheets in the doctors’ hands, which usually detail exactly the problems their children now have. They made a choice based on trusting a doctor, believing the lies, which resulted in the damage to their child.

The system of course, calls the vaccine damage “coincidence”, then labels the parents “anti-vaccine” idiots, and throws them off the cliff.

After the lies, damned lies and statistics used by the pro-vaccine zealots, SATIRE mixed with as much dripping sarcasm as possible, (which amounts to character and intelligence assassination) is considered by the pro-vaccine to be the best way to sow all the propaganda you can imagine into the minds of parents who are thinking about vaccines. “Oh, but anti-anti-vaccine satire is only humour, Hilary!”

This last year has been a revelation to me. We can’t complain we live in boring times. It’s like the curtains have been pulled back to reveal the many faces of deception and mind manipulation everywhere.

Hopefully, those with eyes to see, will take note, and understand, because the satire and lies on all fronts, are the ways of the world, and part of a universal, well-orchestrated escalating campaign.

Those who know the truth, also know that evil communications – or as some would say – bad company - corrupts good manners.  The words you listen to and believe, have a defined outcome.  The words you speak can result in consequences....  ...  Continue Reading